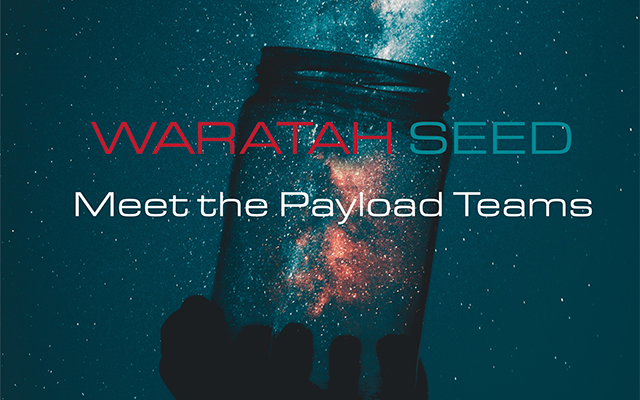 The teams of space technology start-ups in the Waratah Seed WS-1 Payload Competition are great examples of this, with each team’s payload demonstrating strong potential to help Australia contribute meaningfully to climate and environmental goals on the global stage.

‘There’s a history of space entrepreneurialism that Australia has that other countries don’t really have, it’s a part of our new space heritage, so it’s kind of an exciting competition.’ - Dr Jason Held, Chair of the Waratah Seed Payload Competition Committee.

The WS-1 Payload Competition, jointly run by the Waratah Seed Consortium and Wolfpack Space Hub, is excited to announce the short-listed applicants who have been invited to submit their space tech payloads to the final stage of the competition.‍

These are the five teams of space entrepreneurs who made it through to the final phase, Stage 3 of the WS-1 Payload Competition:

In the first phase of Stage 2, each team delivered a private pitch to the WS-1 Payload Competition Committee, followed by one-to-one feedback and mentoring sessions with Jason Held and the Wolfpack Space Hub, to bring their pitching skills up to the level required to gain investors and win commercial clients and partners.‍

In the second phase of Stage 2, the leaders of each team delivered their pitches to a public audience of their peers, the Payload Competition Judging Panel, plus interested observers, in a 2-hour marathon of presentations via zoom conference.

The WS-1 Waratah Seed Payload Competition is similarly designed to help space entrepreneurial start-ups develop their commercial pitching skills, gain valuable mentoring from the Wolfpack and the WS-1 Payload Competition Committee, and ultimately to win one of the available discounted ‘ride-share' slots on Waratah Seed’s maiden flight of satellite WS-1, currently scheduled for launch in late 2022.

Each applicant had 10 minutes to pitch theirPayload ideas to the panel with 5 minutes for Q&A’s, while potential investors and other interested parties watched the proceedings.

Dr Held noted, ’If you are an investor… this gives you an early look at some of the research … and I believe all five of these finalists have some very good attributes that can be built upon to gain investment’. ‍

These are the Payloads submitted by each of the WS-1 Payload Competition Finalists, in brief:‍

Brian Lim outlined the Dandelions payload, which will launch new structural materials into space to test their effectiveness in a space environment. One such material, hemp, is much lighter than carbon fiber and boasts strong heat and flame-resistant properties. While carbon fibre blocks radio frequency signals, hemp allows those signals to pass through, creating a good physical protection for antennas and electronics while allowing them to transmit and receive electromagnetic signals, potentially even during re-entry from orbit.

Natural fibres have high vibration response-dampening qualities and could offset anticipated supply chain shortages of other materials over the next 10 years. Dandelion have already filed for a patent on their new technology. They have a strong focus on developing new innovations in materials, particularly for spacecraft and technology designed for re-entry into Earth’s atmosphere, such as their unique gyrocopter autonomous aerial landing vehicle, which is designed for deployment from space or high-altitude to the ground in emergency situations such as large-scale bush fires.‍

The satellite market is growing rapidly, fuelled by both public and private investment, and there is a strong need to reduce manufacturing costs and time required to deliver solar panel hardware to produce affordable power, both for satellites and potentially for activities on the moon requiring power supply.

Euroka Power aim to test their next generation solar cell technology, based on metal halide perovskites which boast a very high-power conversion efficiency, and are likely much cheaper to make than existing space-rated solar cells. Also highly radiation tolerant, the extra power generated by these cells can support the increased power demands of new applications like space edge-computing and enhanced optical communication, leading to higher value and quality data for Earth Observation, of particular benefit to the Natural Resources sector as well as for disaster and water management uses.‍

With a vision to deliver affordable power to humanity in space, ExtraTerrestrial Power’s WS-1 Payload Competition pitch was for solar cells based on terrestrial silicon technologies, with the aim of helping reduce the substantial costs of solar cells for use in space. Their innovative design is significantly cheaper than currently available space solar cells, and a key component of the design is the development of a unique technology which makes the silicon cells much more radiation tolerant, significantly increasing their useful operating life in space.

The market for efficient and affordable solar cells for use in space is set to grow substantially in the next decade, with investment and deployments already taking off on large-scale satellite ‘mega-constellations’ such as Starlink, the satellite internet solution currently being deployed by SpaceX.

With a core focus on Space Servicing, Sperospace’s Payload Competition pitch was for the development of a robotic arm which can be used to upgrade or repair satellites in-orbit.

This could be used for a wide range of in-space servicing operations such as satellite repositioning, repair and even the construction of larger structures in-orbit. The robotic arm also has potential uses in dealing with dangerous space debris such as that caused by the recent Russian anti-satellite missile test, which forced astronauts at the International Space Station to seek refuge in their space capsules.

Sperospace’s payload addresses one of the key issues facing robotic arms in space by using an innovative tactile grip system, developed in collaboration with Sydney-based robotics company, Contactile, so it represents a significant high-growth potential market.‍

The idea has the potential to bring down the size of the raw data transmitted by a factor of 100 (and in some cases even higher), to massively reduce the costs and minimum order quantities required.This could enable almost real-time applications for earth observation data, which could be accessed as a service business through a cloud-based delivery system, potentially delivering the data as a pay-as-you-go service.

All parts of the computer have been designed, manufactured and assembled in Australia, opening up substantial potential for early investors, with a very large market opportunity that is currently under-served by the satellite industry. Potential uses for this technology are accurate ship detection, mapping tree canopies, estimating solar power output, supporting disaster recovery and mitigation efforts and many more earth observation applications.‍

The WS-1 Payload Competition is heating up in Stage 3, with a $40k discount on the cost of the ride-share for the competition’s First Prize winner up for grabs.

Applicants have now submitted their full, final written submissions, which are now going into judging by the competition panel.